As we have discussed on PennLago previously, Pennsylvanians are afforded heavy protections by our State constitution, which states in Article 1 Section 21 that “the right of the citizens to bear arms in defense of themselves and the State shall not be questioned.”  While not an unlimited right (arguably none of our rights are unlimited) it still provides serious protection compared to some of our surrounding States and other States in the Northeast. 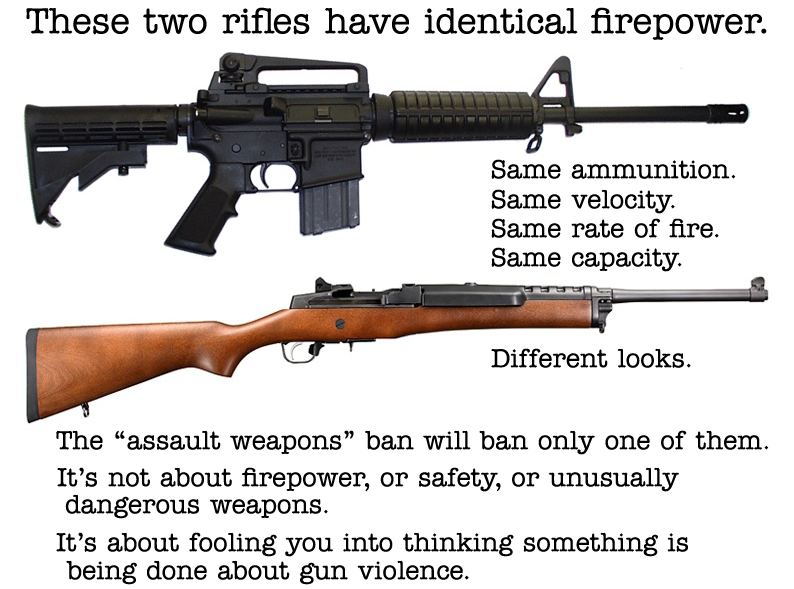 Following the Sandy Hook shooting of 2012 the State legislature in New York took it upon themselves to enact the NY SAFE (Secure Ammunition and Firearms Enforcement) Act, which bans possession of “high capacity” magazines, or magazines with a capacity of over 10 rounds (originally 7).  In addition, “assault rifles” are identified by the bill as weapons that accept detachable magazines and possess one or more of the following features: pistol grip, barrel shroud, telescoping or folding stock, thumbhole stock, bayonet mount, flash suppressor or muzzle break, a threaded barrel, a grenade launcher, shotguns that can accept detachable magazines, fixed magazines that hold in excess of 7 (now 10) rounds.

Similarly, Connecticut passed a law restricting “assault rifles” which they define as selective fire weapons, or weapons placed on a limited (and somewhat arbitrary) list of semiautomatic AR, AK, and SKS variants.  Magazines with capacities over 10 rounds are restricted, although ones owned prior to April 4, 2013 are grandfathered in as long as they are registered.

[If you haven’t watched the Sheriff of Boone County video where he proves that magazine capacity bans do nothing, then you should.]

Both Connecticut and New York’s laws were sued upon and eventually decided in the U.S. Court of Appeals for the Second Circuit.  The Second Circuit court decided that although AR-15 style rifles are “commonly owned” because the answer to whether such weapons are “dangerous and unusual” was “elusive,” the right could be infringed upon.  In short, the court said that while owning AR-15 style weapons is protected by the Second Amendment, the government could infringe upon that right if they have a “legitimate interest,” such as saving lives.  In finding, the court said that AR-15 style weapons are “disproportionally used in crime, and particularly in mass shootings like the attack in Newtown.”

The court used language borrowed from the court in Heller v. D.C. and the 1939 decision in U.S. v. Miller which suggested that the guidelines on what weapons could be lawfully owned under the Second Amendment should be based upon what weapons are in common use.  Under this guidance weapons fitting under the title of “assault rifles” for purposes of the ban are protected as some of the most popular weapons sold in America.  In fact, by some estimations sales of AR and AK style weapons each year outpace the sale of F150 pickup trucks in America.  Even by the estimations the Second Circuit court used AR style weapons account for 2.5 % of all weapons owned in America, or roughly the same percentage of Toyota Prius’ on the road as compared to the total number of cars on the road, which the court decided was sufficient to establish common use.

However, the recognized 2nd amendment right was not afforded strict scrutiny, which would have required that the New York and Connecticut laws which impact a constitutional right must serve a compelling state interest, and be narrowly tailored and necessary to serve that interest. Almost every other constitutionally enumerated right is tested using the strict scrutiny test in the courts.  Instead, the Second Circuit decided that although the answer was elusive to the question whether AR style weapons are “dangerous and unusual,” they could still be banned as a way to prevent gun violence.  The court used intermediate scrutiny in this determination (the proposed law is “substantially related” instead of “necessary” to the State interest at issue).  It is unlikely this law would have passed a strict scrutiny test, as it seems to broad, and lacks the evidence needed to show that the law would be necessary to meet the State interest in minimizing firearm related deaths.

After the Second Circuit decision, the firearm owners group who sued, the Connecticut Citizens Defense League (CCDL) appealed the decision.  Unfortunately, the Supreme Court denied certiorari and said that they would not hear the case, thereby letting the Second Circuit decision upholding the law stand.  While we do not know how this would have played out in the Supreme Court after the passing of Justice Scalia, we know that New York and Connecticut residents will remain burdened by the ban for the foreseeable future.

Unfortunately, even at the federal level “assault weapon” bans are not unheard of, and the federal government in fact banned such weapons between 1994, and 2004, when the ban expired.  Congress chose not to renew the ban after its expiration.  The overall constitutionality of individual states instituting such bans is still undecided, as the Supreme Court has not yet heard a case on the issue.  District Courts remain somewhat split on the matter, or at least split on what test to use to properly evaluate assault weapon ban laws.  The court of appeals for the Fourth Circuit said that a lower court used the wrong standard of review when they chose not to use the strict scrutiny standard in reviewing a Maryland assault rifle ban.  That case has been sent back to the lower court to be reheard using the strict scrutiny standard.

While Pennsylvanians remain solidly protected from such State weapons bans by our State constitution, it is wise for responsible gun owners to pay attention to the political landscape, and the potential for the federal government to attempt a renewal of such a ban in the future.  States in other districts instituting similar bans can act as test cases for how a national ban may play out.  Even for gun owners that do not own weapons that fit in the “assault weapons” category, remaining vigilant of our rights is important to prevent sliding further on what can be a slippery slope.  Pay attention to coming court decisions, and remember to vote!

[Hat tip to Gil Ambler who wrote this post.]