Open Carry In Philadelphia: Shall Not Be Questioned? 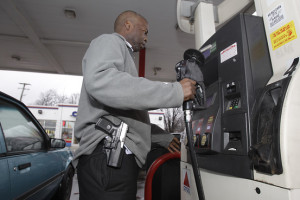 Open Carry In Philadelphia: Shall Not Be Questioned?

The Pennsylvania Declaration of Rights (1776) reads “Right to Bear Arms Section 21.  The right of the citizens to bear arms in defense of themselves and the State shall not be questioned.”

When it comes to Philadelphia, is the right to bear arms questioned?

While people have different opinions when it comes to the value and the tactics of open carry, generally, you don’t need a license to open carry in Pennsylvania. As long as you are not prohibited from possessing a firearm under state or federal law, you can openly carry a firearm on your person. Why “generally” and not “always?” There is a law restricting the right to open carry “in a city of the first class.” 18 Pa.C.S. § 6108. The statute provides, in pertinent part, “No person shall carry a firearm, rifle or shotgun at any time upon the public streets or upon any public property in a city of the first class unless: (1) such a person is licensed to carry a firearm . . . .” There is also an exception for those who are exempt from licensing requirements, but that is beyond the scope of this discussion. 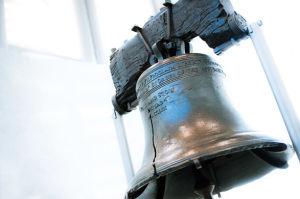 Retrieved from visitphilly.com on December 1, 2014.

But does this seemingly arbitrary restriction provide a valid basis to restrict open carry?

Is there something magical about a political division containing a million people make it outside the scope of the The Pennsylvania Declaration of Rights Article 1 Section 21? 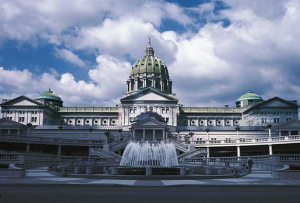 Retrieved from pacapitol.com on December 1, 2014. 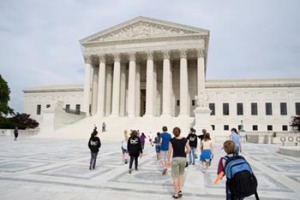 Supreme Court of the United States retrieved from supremecourt.gov on December 1, 2014.

Until recently, the District of Columbia has prevented private citizens from carrying  functional handguns in public for self-defense.  Additionally, D.C. has denied handgun registration to non-residents. However, the District Court has recently reached a holding which enjoins D.C. from continuing such practices. Palmer v. District of Columbia. In its holding, the court found that Second Amendment rights must extend beyond the confines of the home. The court rested on the Supreme Court’s conclusions in Heller, noting that “the Second Amendment codified a pre-existing, individual right to keep and bear arms and that the ‘central component of the right’ was self-defense.” Palmer quoting Heller at 592, 599. Moving forward, the court highlighted that the Second Amendment protects the right “not only to ‘keep’ arms but also to ‘bear‘ them.” Palmer quoting Peruta, 742 F.3d at 1151. In determining what it means to “bear” arms, the Supreme Court has followed Justice Ginsburg’s interpretation of the term in Muscarello v. United States: “‘wear, bear, or carry . . . upon the person or in the clothing or in a pocket, for the purpose . . . of being armed and ready for offensive or defensive action in a case of conflict with another person.'”524 U.S. 125, 130 (1998). Taking the analysis one step further, the court took the same position as the Ninth Circuit in Peruta v. County of San Diego. 742 F.3d 1144 (2014).  Essentially, as confrontation is by no means limited to the home, and may very well be even more prevalent in public, the court found that the drafters of the Second Amendment must have intended that its protections extend beyond one’s front door.

Although the court enjoined D.C. from enforcing its effective prohibition of carrying firearms, it did not prevent D.C. from enacting regulations as to who may carry firearms. A licensing requirement seems to be permissible, so long as licensure is in fact attainable. In fact , the court granted D.C. a 90 day stay to draft legislation in compliance with the court’s decision. 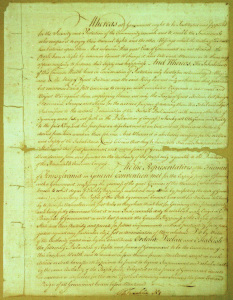 Pennsylvania Constitution of 1776 retrieved from http://www.portal.state.pa.us/ on December 1, 2014.

The Pennsylvania Constitution guarantees the right to bear arms more clearly than the United States Constitution, reading “The right of the citizens to bear arms in defense of themselves and the State shall not be questioned.” Ongoing disputes regarding the Second Amendment question whether the right applies to private citizens. As we’ve established, according to the Supreme Court, it does. The Pennsylvania Constitution leaves no room for this argument, as it plainly applies to “the citizens,” makes no reference to militia, and specifically provides a purpose for this right in “defense of themselves and the State.”

If the Pennsylvania Constitution guarantees the citizens’ right to bear arms in defense of themselves, could the right possibly be limited to one’s home? After all, nobody spends their entire life in their home. In Pennsylvania, carrying a firearm  in your car is extremely limited. In fact, unless you have a License to Carry Firearms, it is illegal to have a firearm in your vehicle (with some limited exceptions) which is accessible for self-defense. The Philadelphia restriction only further reduces our ability to defend ourselves, as we cannot even walk to our destination carrying a firearm without a License to Carry Firearms. That being considered, there is presently no viable option for the citizens of Philadelphia who have not obtained a License to Carry Firearms to bear arms in defense of themselves unless they are in their own home. Does this conflict with the guarantees set forth in Article I, Section 21?

Although the Supreme Court’s  interpretation of the Second Amendment has no binding effect on the Pennsylvania Constitution, the Court’s reasoning does provide one perspective and possible interpretation. The Supreme Court of Pennsylvania could find that the rights provided in Article I, Section 21 are “not unlimited” and that the licensure requirement constitutes a permissible limitation. On the other hand, the Court could conclude that the licensure requirement unduly burdens law abiding citizens, as it extends beyond the limitations regarding who may possess firearms under already existing state and federal law.

If an individual with standing challenges this restriction, it appears that their strongest argument would be found in the Pennsylvania Constitution, rather than the United States Constitution. However, whether this challenge would succeed is purely speculative.

Recall that this coming election cycle will have an unprecedented number of Pennsylvania Supreme Court seats up for election. So if there is a time to do it, perhaps it would be time to do so now.

Until such a challenge is brought, and ruled on, law abiding gun owners (LAGOs) should refrain from open carry in Philadelphia without a Pennsylvania License to Carry Firearms.