If you’re a law abiding gun owner, it’s vital to be familiar with the federal laws which dictate what kind of weapons you may and may not legally own. Under the National Firearms Act (NFA), certain weapons are heavily regulated. As a result, those who wish to own a firearm subject to NFA regulations must go through an extensive process. These regulations are monitored by the Bureau of Alcohol Tobacco Firearms and Explosives (BATFE).

The NFA defines a rifle as “a weapon designed or redesigned, made or remade, and intended to be fired from the shoulder and designed or redesigned and made or remade to use the energy of the explosive in a fixed cartridge to fire only a single projectile through a rifled bore for each single pull of the trigger, and shall include any such weapon which may be readily restored to fire a fixed cartridge.”

BATFE’s NFA Handbook more concisely defines the term as “a firearm designed to be fired from the shoulder and designed to use the energy of an explosive in a fixed cartridge to fire only a single projectile through a rifled barrel for each single pull of the trigger.” A rifle is subject to the regulations provided by the NFA if its barrel is under 16 inches.

BATFE’s NFA Handbook additionally provides a separate category of regulated firearms called “Weapon(s) made from a rifle” which includes any rifles which is less than 26 inches in overall length. For the purposes of this posting, we will refer to any of the above mentioned NFA regulated firearms as “short barreled rifles” (SBR).

From where are these forbidden lengths derived? There doesn’t seem to be a concrete explanation. We cannot tell you what evidence based reason justifies a 16.1 inch barrel rifle requiring normal GCA regulation and a 15.9 inch barrel requiring NFA regulation, or why the overall length triggers one over the other. Perhaps no one knows. 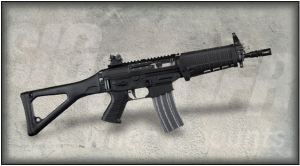 In recent years, we have seen a yet another brilliant design emerge from Sig Sauer in a stabilizing brace known as the SB 15. The SB 15 is an arm brace which attaches to a gun, allowing users to fire a larger pistol with one hand. Below is a photo of the SB 15 standing alone. 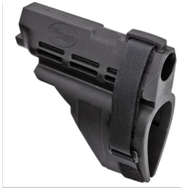 Since its storm onto the market, the SB 15 has been commonly paired with AR-15 style pistols. Use in this fashion is depicted below. This has made the product particularly useful for individuals with physical limitations to defend themselves. 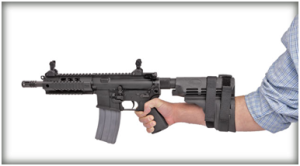 However, if you look closely, the SB 15 resembles a stock, and can easily be used as such. To the left is Sig Sauer’s P516 7.5” Pistol equipped with the SB 15. To the right is an NFA regulated SBR manufactured by Sig Sauer, the SIG556 Classic SBR.

As previously discussed, the BATFE’s NFA Handbook defines a rifle as “a firearm designed to be fired from the shoulder,” and SBR’s are subject to NFA regulations. Does this mean that AR-15 style pistols, when equipped with the SB 15 become subject to NFA regulations? To date, the answer has been “no.” The BATFE first addressed this issue in the letter posted on SIGSAUER.COM ensuring compliance (http://www.sigsauer.com/upFiles/ATF-Compliant-Letter.pdf).

In a letter dated November 26, 2012, John R. Spencer, then-chief of BATFE’s Firearms Technology Branch found that “the device is not designed or intended to fire a weapon from the shoulder” and thus “would not be subject to NFA controls.” (emphasis in original). In reaching this conclusion, Spencer reasoned that “the device provides the shooter with additional support of a firearm while it is still held and operated with one hand.”

That’s all great, but what if you do use an SB 15 to fire that same AR-15 style pistol from the shoulder? Does it become classified as an SBR subject to NFA regulations? Again, no. While this might seem surprising at first glance, if you read the NFA regulations closely, you’ll notice that a special emphasis is placed on design rather than use. The SB 15 isn’t designed to be a shoulder stock. Its design has a very different, innovative and practical purpose.

In a letter to the Greenwood Police Department (CO) dated March 5, 2014, then-chief of BATFE’s Firearms Technology Branch Earl Griffith took a similar stance and clarified the matter (http://www.guns.com/wp-content/uploads/2014/04/atf-arm-brace-letter.jpg). Griffith represented that “firing [an AR-15 type] pistol from the shoulder would not cause the pistol to be reclassified as an SBR.” Furthermore, Griffith explained that the Firearms Technology Branch “classifies weapons based on their physical design characteristics” and, as a general proposition, not “based on how an individual uses a weapon.”

This was a seemingly important finding. If use of the SB 15 to fire a pistol from the shoulder did change the weapon’s classification, law abiding gun owners would want to know about it. Otherwise, an enthusiast with the purest of intentions could end up violating federal law for simply using the same gun with the wrong part of your body.

SBR under the NFA

NOT an SBR under the NFA

So that settles it, right? Unfortunately not. Recently, Black Aces Tactical ―a manufacturer in Florida― developed a short barreled shotgun which employs use of the SB 15. In a letter to Black Aces addressing the firearm’s status, BATFE concluded that using the SB 15 as a shoulder stock would render this particular weapon subject to NFA regulations. (http://www.shootingsportsretailer.com/wp-content/uploads/2014/11/sigbraceusage.jpg).

Max Kihgery, Acting Chief of the Firearms Technology Industry Services Branch, additionally found that if the model is used with one hand by utilizing the forearm brace “as intended,” NFA regulations would not apply. 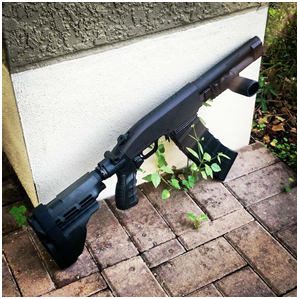 Black Aces Tactical Shotgun with SB 15 Retrieved from
THETRUTHABOUTGUNS.COM on 11/20/14 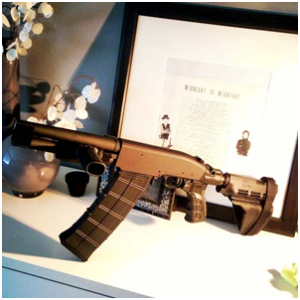 Black Aces Tactical Shotgun with SB 15 Retrieved from THETRUTHABOUTGUNS.COM on 11/20/14

This finding does not appear to impact use of the SB 15 on any weapons other than Black Aces’ shotgun, as Kihgery specifically referred to “the submitted sample” and “this firearm,” and reiterated that “this classification pertains only to this type of firearm.” Nevertheless, does this conflict with BATFE’s previous stances on use of the SB 15? Like its definition of “rifle,” the NFA Handbook definition of a shotgun begins “a firearm designed to be fired from the shoulder.” Is it fair to say that Black Aces’ shotgun is not designed to be fired from the shoulder? After all, BATFE has recognized that purpose of the stabilizing brace is to “[provide] the shooter with additional support of a firearm while it is still held and operated with one hand.”

In the March 5, 2014 letter referenced above, BATFE represented that “FTB classifies weapons based on their physical design characteristics. While usage/functionality of the weapon does influence the intended design, it is not the sole criterion for determining the classification of a weapon. Generally speaking, we do not classify weapons based on how an individual uses a weapon.” However, BATFE found that Black Aces’ shotgun “is not a ‘firearm’ as defined by the NFA provided the SigTac SB15 pistol stabilizing brace is used as originally designed and NOT used as a shoulder stock.”

The reasoning provided asserts using the stabilizing brace as a shoulder stock constitutes the weapon being “made or remade, designed or redesigned from its originally intended purpose.”It is one thing to assert that the weapon is designed to be fired from the shoulder. After all, it’s a shotgun, and it’s going to kick like a mule. However, is it fair to say that an individual’s use of the weapon in a certain manner constitutes making, remaking, designing or redesigning it from its originally intended purpose?

Regardless, armed with this knowledge, the law abiding gun owners who come into possession of the new Black Aces’ shotgun are advised to keep the SB15 off of the shoulder.