Target Practice On Your Own Property

Target Practice On Your Own Property

Target practice is an important part of any shooter’s training. Many law abiding gun owners (LAGOs) carry firearms, or keep firearms in their homes, with the intent of defending themselves in the event of a critical incident. Keeping that in mind, one can’t expect to adequately use a firearm in self-defense without the proper training.

A good club might have anything you need for target practice (such as Harrisburg Hunters’ & Anglers’ Association and Green Valley Sportsmans Club). Other ranges are open to the public, and have a tremendous amount of resources for your training needs (like 717 Armory and Target Master). 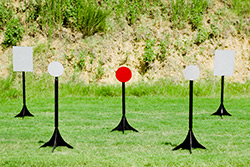 When it’s not possible to get out to the club or the range, can target practice be lawful on your own property? Under some circumstances, in fact it can be.

Let’s preface this by saying safety is always the number one priority when handling a firearm. Regardless of what the law requires or does not require, take as many precautions as possible to ensure that all target practice is done safely. Always be aware of what is beyond your target, and take preventative measures to ensure that you don’t hit anything you do not intend to destroy.

With respect to State law, the main provision pertaining to target shooting is found in Title 34, the Game Code.

(a) General rule.–It is unlawful for any person during the open season for the taking of any big game other than turkey to:

(1) Shoot at any mark or target other than legal game or wildlife with a firearm of any kind or a bow and arrow.

(b) Exceptions.–This section shall not be construed to apply in any manner to:

(4) Shooting at a properly constructed target or mark or a dead tree protected by a natural or artificial barrier so that the ball, bullet or arrow cannot travel more than 15 yards beyond the target aimed at, after making due allowance for deflection in any direction not to exceed an angle of 45 degrees. Target shooting shall only be lawful when it is done:

(ii) Within 200 yards of the camp or other headquarters where the person shooting is quartered or is an invited guest or visitor.

Here, we find a restriction that applies “during the open season for the taking of any big game other than turkey.” Being found in the Game Code, this law purportedly aims to protect wildlife and preserve the integrity of hunting practices. Regardless, it is important to comply with this law during the appropriate time periods.

As post is limited to target practice on your own property, it is important to note that the exception to the general prohibition only applies “when it is done upon property owned by the shooter or by a guest of the property owner.” If the target practice takes place on your own property, this will not be an issue. So what exactly is required to follow the law while target shooting on your own property here in Pennsylvania? At least during the stated time period, target shooting requires a backstop which prevents bullets from traveling more than 15 yards beyond the target.  It also must account for deflection of 45 degrees in any direction.

Whether you make your own backstop or the lay of the land forms a natural backstop makes no difference, as long as it serves its necessary purpose. The idea is that it must prevent your bullets from hitting things other than the intended target. The standard provided by law is fifteen yards beyond the target, and 45 degrees in any other direction when accounting for deflection. Other than the specific units of measure, for the most part it comes down to common sense.

What about the safety zone provision in 34 Pa.C.S. § 2505? Frankly, it doesn’t apply when dealing solely with target shooting on your own property.

a) General rule.–Except as otherwise provided in this title or to any political subdivision, its employees or agents, which has a valid deer control permit issued under section 2902(c) (relating to general categories of permits), it is unlawful for any person, other than the lawful occupant, while hunting game or wildlife, taking furbearers of any kind, or pursuing any other privilege granted by this title, to hunt for, take, trap, pursue, disturb or otherwise chase any game or wildlife or to discharge, for any reason, any firearm, arrow or other deadly weapon within or through a safety zone, or to shoot at any game or wildlife while it is within the safety zone without the specific advance permission of the lawful occupant thereof.

(1) Except as otherwise provided in paragraph (2), the area within 150 yards around and that area which is below the highest point of any occupied dwelling house, residence, or other building or camp occupied by human beings, or any barn, stable, or other building used in connection therewith or any attached or detached playground of any school, nursery school or day-care center.

The prohibition applies “while hunting game or wildlife, taking furbearers of any kind, or pursuing any other privilege granted by this title.” Technically speaking, The Game Code does not “grant the privilege” of target shooting. Although in the context of preemption, the Commonwealth Court has held that Section 2505 “deals only with the area in which it is safe to discharge a firearm for purposes of hunting game or wildlife, not general target practice activities whether or not related to hunting.” Baird v. Township of New Britain, 633 A.2d 225, 229 (Pa. Cmwlth. 1993). As a result, this law does not appear to impact target shooting on one’s own property.

That being said, as discussed above, it is vital that you take every step possible to ensure the safety of those around you when target shooting. Just because conduct does not violate Section 2505 does not necessarily make it either safe or acceptable or totally legal. 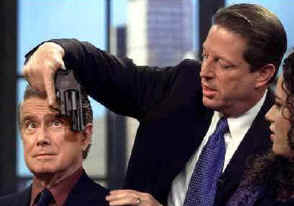 Outside of the Game Code, a law from the Crimes Code could potentially come into play if target shooting isn’t practiced safely and properly: Recklessly Endangering Another Person (“REAP”). This particular crime covers a number of different circumstances and scenarios, and basically imposes a duty on citizens not to put others in harm’s way.

A person commits a misdemeanor of the second degree if he recklessly engages in conduct which places or may place another person in danger of death or serious bodily injury.

Can shooting a firearm at a target without a backstop constitute conduct which places or may place another person in danger of death or serious bodily injury? Of course it can, depending on the circumstances.
Does that make the conduct reckless? Under 18 Pa.C.S. § 302, a person acts recklessly when he:

consciously disregards a substantial and unjustifiable risk that the material element exists or will result from his conduct. The risk must be of such a nature and degree that, considering the nature and intent of the actor’s conduct and the circumstances known to him, its disregard involves a gross deviation from the standard of conduct that a reasonable person would observe in the actor’s situation.

One is reckless when they know of a serious risk, but ignore it anyway.  Even though they knew it was going to happen, or that it was likely to happen, they did it anyway. In the context of REAP, Pennsylvania courts have said that the offender must “consciously disregard a known risk.” 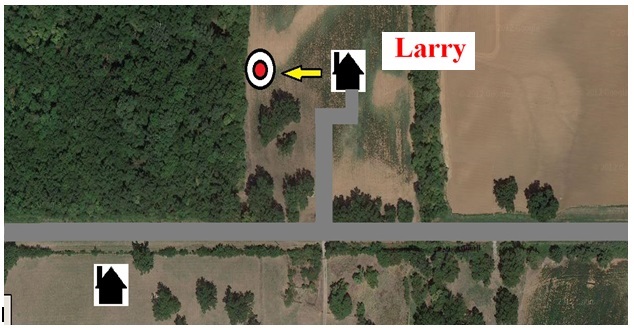 Suppose Larry lives on 80 acres in God’s Country, Pennsyltucky. He has no neighbors on his side of the road, although there are neighbors across the road. Larry likes to shoot in his backyard, towards the wooded area on his property. There are no people, houses, roadways, or anything but trees for miles in that direction. Larry does not have a backstop. Is he violating 34 Pa.C.S. § 2507? If it’s open season for big game other than turkey, than yes. But is he recklessly endangering another person? Probably not. For purposes of this example, let’s presume that there is no way a bullet can travel beyond Larry’s property. There is no substantial risk that shooting in that direction can put another person in danger of death or serious injury. Because of the location, there’s no substantial risk that somebody will be hit by a stray bullet.

What if there are trespassers hanging out in the wooded area beyond Larry’s target? Remember that there must be conscious disregard of a known risk. Unless Larry either knows that the trespassers are there, or knows that they are likely to be there (for instance, if he sees them there regularly, or finds messes they’ve left behind on a regular basis) there is no known risk for Larry to consciously disregard. 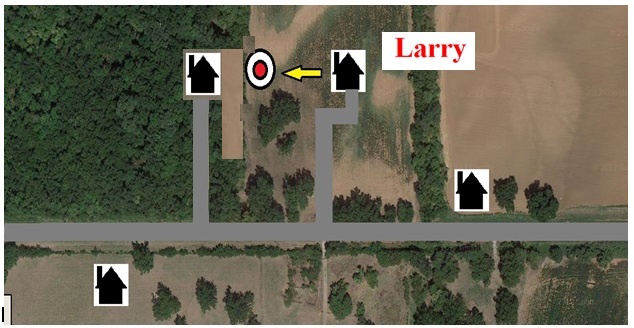 Suppose that in a different scenario, Larry has neighbors. They just recently built a house which sits beyond his target. Larry still does not have a backstop. Aside from violating Section 2507 during the requisite time periods, Larry needs to be concerned with REAP. If the property lines are close enough, there is a substantial risk that his bullets could hit his new neighbors or others on their property. Larry should find a safer way to shoot, or he will be placing others in danger of death or serious bodily injury, and could face criminal penalties.

Shooters also need to be aware of local ordinances regarding target shooting and the blanket discharge of firearms. We understand that there is a tremendous amount of ongoing litigation regarding whether or not these ordinances are preempted. We in fact filed one of them [see U.S. Law Shield sues City of Harrisburg]. However, until the matter is resolved and the local governments are ordered to repeal these ordinances, it is important to use proper judgment. Just because a local government doesn’t have the authority to uphold an unlawful ordinance, doesn’t mean its officers will not enforce it. 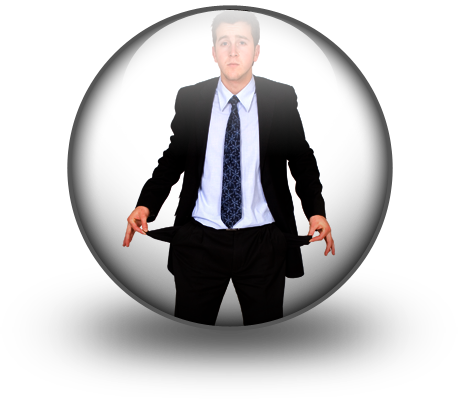 Those who face civil liability stand to lose their money.

Civil Liability
Another cause for concern is civil liability. Even if one complies with the Game Code, and conduct is not necessarily reckless, things can still go wrong. Always remember Murphy’s Law: “Anything that can go wrong, will go wrong.” Suppose there was never any conscious disregard of a substantial risk. Suppose the shooter is Nicky the Knucklehead, and he never considered the risk. He will likely face civil lawsuits under a negligence theory. Remember, in civil lawsuits, your assets are at stake, rather than your freedom [see Justified IV: Civil Implications of the Justified Use of Deadly Force]. Negligence requires four elements: duty, breach, causation and harm. If conduct causes harm, it can generally be found negligent if the offending actor “knew or should have known” that the harm was likely to occur. Whether somebody knew or should have known is evaluated using an objective standard. The finder of fact (usually a jury, but a judge if it is a bench trial) will determine whether the “reasonably prudent person” would have behaved differently under the same or similar circumstances. Therefore, it doesn’t matter if Nicky is in fact a knucklehead. He will not be evaluated under whether a knucklehead should have known, he is evaluated under whether the reasonably prudent person would have known. The standard is not lowered for people who lack common sense.

That being said, it is extremely important to do everything possible to ensure that target shooting is done safely. While there are criminal and civil penalties which come with certain behavior, it is always best to go above and beyond when safety is at stake. As law abiding gun owners, and responsible gun owners, it is important that we each do our part and not become just another statistic.