There are probably few sounds more terrifying than the sound of a window breaking in your house in the middle of the night.  Someone is breaking into your home- the space that should be the safest.  How can you respond?  Legally speaking, what can you do to respond?

As terrifying as this experience would be, fortunately the law in Pennsylvania (unlike some of our neighboring States) recognizes our right to defend ourselves in the home. Under certain circumstances, even deadly force is authorized in Pennsylvania when there is an intruder in your home. This right is known in popular culture as the “Castle Doctrine.”  While the Castle Doctrine concept has some variation from state to state (and there are some states that don’t have it at all), it is often misunderstood and misinterpreted.  Anyone who has attended any of U.S. Law Shield’s “Justified Use of Deadly Force” classes has probably heard our program attorneys speak about how the Castle Doctrine provides a presumption that deadly force is reasonable in response to unauthorized or forced entry into one’s home or occupied vehicle.

A more comprehensive explanation of the castle doctrine can be found in an old PennLAGO.com article here:

Justified Part 3: The Castle Doctrine and Stand Your Ground

The recent Supreme Court of Pennsylvania opinion in COMMONWEALTH OF PENNSYLVANIA v. WILLIAM CHILDS has helped to confirm and clarify what our U.S. Law Shield program attorneys have been teaching, namely in the fact that this presumption under the law is a rebuttable presumption.  In other words, this presumption goes immediately in the homeowner’s favor, but that can be overridden or totally destroyed by facts. In other words, it would then take specific facts to prove that you did not have that required reasonable belief that death, serious bodily injury, kidnapping or sexual assault at the time of the shooting and/or that the threat was not imminent.

An easy way to think of this is that under the Castle Doctrine the scale of whether the action you took was in fact reasonable starts tipped very much in your direction after a self-defense incident in your home. But a rebuttable presumption is not absolute. There are circumstances or facts that can totally remove it.

For example, suppose the police arrive to your house and find a dead intruder in your house right next to the kicked in door. Initially, and with no other information, it certainly at first blush seems to have all of the hallmarks for the Castle Doctrine. You don’t give a statement. You think you are in the clear, right? However, the police notice that you have installed a security camera that covers the exact area of the shooting. They apply for and get a search warrant for the recording. The video shows the forced entry. Then, it shows you engaging the intruder with your gun. The intruder goes down, but is not dead. The intruder is not moving and appears to be totally unresponsive, but again not dead. For several minutes while you wait for the police arrive, he remains totally unresponsive, but not dead. You leave the room. You come back. You sit down with your back to intruder. Suddenly, and for no reason, you walk over to him while he still has not moved one millimeter and has presented no current immediate threat as he is totally unresponsive, you shoot him. That is an example of what would have been a very legitimate use of The Castle Doctrine totally destroyed by the circumstances.

The recent Supreme Court of Pennsylvania opinion Childs mentioned above is very instructive to us about the Castle Doctrine. In that case, some people at a small birthday party got into a verbal altercation.  After the victim was told to leave, he forced his way back into the house and began striking Child’s with a broom handle.  Childs stabbed the victim one time, which ultimately killed him.  Childs was initially convicted of murder. The trial judge ruled that Childs was not afforded the protection of the Castle Doctrine codified at 18 Pa.c.s.a. § 505(b)(2.1).  The trial court reasoned that as at the time the incident occurred the Castle Doctrine was not yet effective (although it became effective before the start of the trial).  Without the Castle Doctrine protection, Childs was convicted of murder, and sentenced to 16-32 years imprisonment.  The government did not argue that under the Castle Doctrine Childs would not have been protected, but simply said that because the Castle Doctrine was not effective at the time the incident took place its protections did not apply.  Without the castle doctrine Childs lacked the benefit of the presumption that what he did was lawful. The jury came back for the government and against him. By their verdict, the jury found that his actions were either unreasonable, and/or that he did not have imminent fear of death or serious bodily injury at the time of his actions and/or that there were other avenues he could have pursued, such as fleeing, if he could do it with complete safety which is a very fact specific determination.

Here is our state’s standard jury instruction for the Castle Doctrine.

In fact, the law further presumes that someone who unlawfully and by force enters or attempts to enter a defendant’s dwelling, residence, or occupied vehicle or removes or attempts to remove someone against their will from the defendant’s dwelling, residence, or occupied vehicle, is acting with the intent to commit an act resulting in death or serious bodily injury [or kidnapping or sexual intercourse by force or threat]. If the defendant knows or has reason to believe that this unlawful and forceful entry or act is occurring or has occurred, the law then presumes that the defendant’s belief in the necessity of using deadly force is reasonable and justified.

However, a defendant is not presumed to have a reasonable belief that deadly force is immediately necessary to protect himself or herself when:

[(i) the person against whom the force is used has the right to be in or is a lawful resident of the dwelling, residence, or vehicle, such as when they are an owner or lessee of the premises;

(ii) the person sought to be removed is a child or grandchild or is otherwise in the lawful custody or under the lawful guardianship of the person against whom the protective force is used;

(iii) the defendant is engaged in a criminal activity or is using the dwelling, residence, or occupied vehicle to further a criminal activity. “Criminal activity” means conduct that is a misdemeanor or felony, is not justifiable under the Crimes Code, and is related to the confrontation between an actor and the person against whom force is used; or

Keep this in mind: a person is justified in using deadly force against another not only when they are in actual danger of unlawful attack but also when they mistakenly, but reasonably, believe that they are. A person is entitled to estimate the necessity for the force he or she employs under the circumstances as he or she reasonably believes them to be at the time. In the heat of conflict, a person who has been attacked ordinarily has neither time nor composure to evaluate carefully the danger and make nice judgments about exactly how much force is needed to protect himself or herself. Consider the realities of the situation faced by the defendant here when you assess whether the Commonwealth has proved beyond a reasonable doubt either that [he] [she] did not believe [he] [she] was actually in danger of death or serious bodily injury to the extent that [he] [she] needed to use such force in self-defense, or that, while [he] [she] did believe that, [his] [her] belief was unreasonable.

You can see how powerful this instruction is and without it what you can lose, right?

The Superior Court in the Childs case, on appeal, reasoned that the Castle Doctrine provision was a procedural change, and that because it was in effect before the case was heard (although after the incident) it should apply, and Childs should be afforded its benefits.  It likely would not have applied if both the incident and the trial had happened before the law took effect.  The Supreme Court of Pennsylvania also agreed with the Superior Court and said that the castle doctrine should have applied, and remanded the case for a new trial.

The important takeaway is what U.S. Law Shield attorneys have already been telling people:  that the Castle Doctrine provides a presumption of the need to use deadly force without any other facts or information needed, and that such presumption is a flexible standard driven by facts which can be overcome by facts, or even your own words.

At our seminar, as a cautionary tale, we frequently share with the audience the real case handled by The McShane Firm that was called “The case of the 2 handed burglar.” The police were sent to the scene of a critical incident where a homeowner shot and killed a nighttime burglar. When the police arrived, they quickly sorted out that the homeowner was the good guy and the decedent was the intruder. The coroner was on the scene. The police were treating the homeowner well allowing him to sit at his own kitchen table to wait for the detective to show up. The homeowner was also a really nice fellow. He made coffee for the police and the detective when he arrived. The Detective initially went into the investigation thinking that this was a clear cut justified use of force case. So he just asked one question: “What happened?” The homeowner said “I was asleep upstairs. I heard some rustling downstairs. I grabbed my gun. I went downstairs. I saw that burglar getting the TV off of the wall. He had the TV in both hands. I shinned the light on him. He was surprised. I shot him while he was holding on to the TV. He dropped and broke the TV after I shot him. Then I called you guys.” Sure enough, the Detective saw the brokenTV right next to the body. 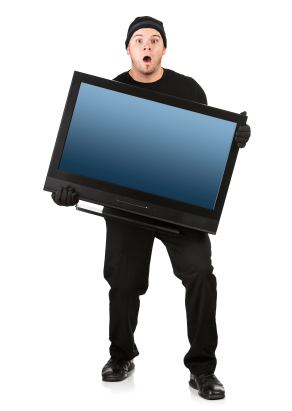 Well, that homeowner’s statement is a fine example of how your own words can really come back and haunt you. This homeowner really did a great deal of damage to his Castle Doctrine presumption, didn’t he?

Remember, even in the event of a self-defense incident and even if it is a clear cut one in your own home- LAWYER UP and SHUT UP!