Mobs and the PennLAGO: What is a legally armed citizen to do?

Any unscripted attack with multiple assailants is a nightmare scenario. Mob and herd mentalities can create powerful influences on the group dynamic to create sudden and total violence including death or near death. All one needs to do is think of April 29, 1992 and this scene that was broadcast all over the United States: 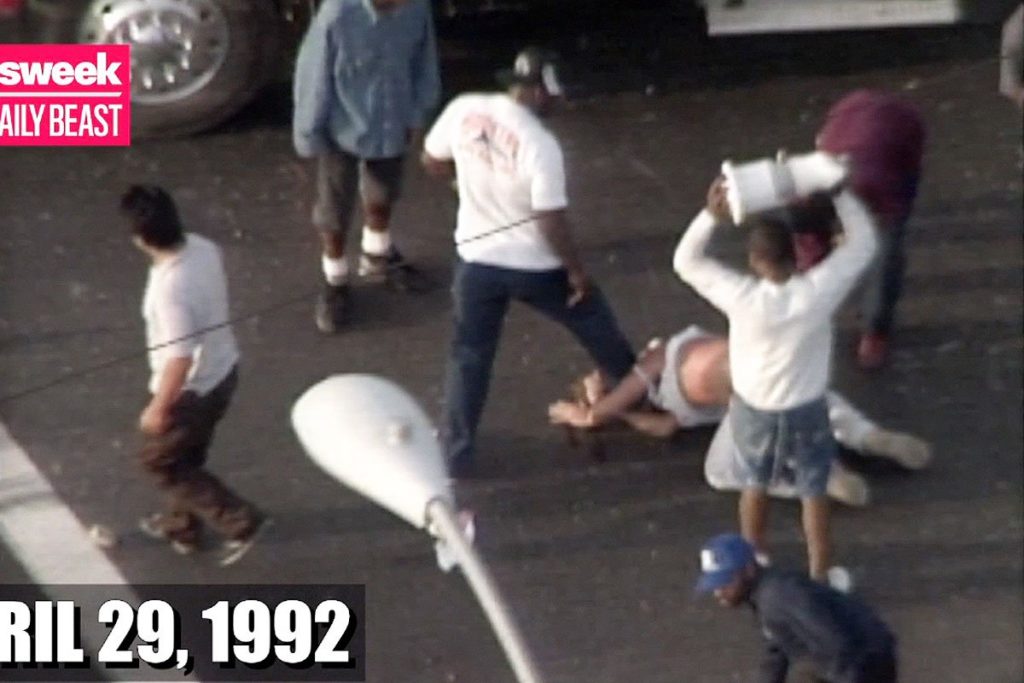 An innocent truck driver, Reginald Denny, was savagely attacked by a mob where he was kicked, punched and even had a brick thrown at his head with the assailant dancing afterwards. All on video too. A very brazen attack.

The question is: Legally what can you do if you find yourself in your car and suddenly a mob surrounds you? Can you run them over? Can you shoot them? The answer is, it depends.

1. Maintain your situational awareness. Being in a car or a truck is not a Condition White situation. Don’t text or otherwise engage in distracted driving and especially do not do so when you are stopped. Keep your head on a swivel. Check out your world. Listen to the news. Know what is going on in your community and where you are. If there is trouble, don’t go there or go through there. Avoid offensively.

2. Create a tactical bubble. When you do come to a stop, leave a tactical gap between you and the car in front of you and try not to be in the center lane. If you “pin” yourself in, then you literally have nowhere to go. The rule of thumb whenever you have to come to a complete stop always be able to see the wheels of the car in front of you and never be in the center lane. The space in front will allow you to exfiltrate easily by a simple sharp cut of the wheel and pressing down on the gas to go. If you are in trouble, hop the curb, go up on grass, do whatever it takes to avoid offensively. The obvious point of not being in the center lane is that you lose the usefulness of that tactical gap of you have cars to your left and right hemming you in. So, don’t be in that center lane when you come to a stop. These principles of a tactical bubble around your car apply even when you are in motion with one important change, you need to allow for several car lengths in front of you to allow for that tactical gap. This isn’t NASCAR and drafting. This is about avoiding offensively and getting home to your family. If you are doing it right and there is traffic, then people will hop in front of you (without even so much as a wave of thanks because that is what people do these days, right?), but don’t worry that means you are doing your job! All you have to do is create space again.

3. Worse case scenario, get off the x. From a tactical point of view, the old saying “Get off the X” applies meaning simply “do not stop the car.” If your “spider sense” is tingling and you feel that “something is wrong” then you should listen to it. Your life experience has taught you to intuit certain things to be dangerous even if you cannot put your finger on it. If you have this intuition, then the better thing to do is to act rather than react. What is the worst that can happen when you check the intersection and slowly blow that stop sign and keep going? You get stopped by a police officer? Thank God! If you believe that you are in danger and have to take that type of maneuver, being stopped by a police officer is a great fortunate outcome, isn’t it? Being a stationary target for evil is much more dangerous for the driver than a mobile target. Even moving at a relatively slow 10 mph is much better than a dead stop. So if there is a stop sign and you feel something is truly wrong or you see evidence of a mob coming, then choose that lesser of two evils and as safely as you can get off the x.

4. Understand that there are bad people out there. There are some very bad people out there. People who do not have morals or rules. There are people who have no mercy. They have an unlimited capacity for violence. Although you may think that you know who they are or that you can spot them, you may not. It’s not like bad guys or girls wear a sign around their neck that reads “Bad Guy” or that they will call you up to schedule their assault on you and your family.  You need to understand this and accept this. You need to be mentally prepared for this. When you are driving, take “mental reps” where you think about what you would do if you were suddenly approached by a mob or by evil people bent on hurting you and others. Be prepared. The when/then exercise is important to your survival.

What if all of this offensive avoidance fails? What if you are stuck in your car and there is a mob. What can you do?

1. Don’t get out of the car. Only under extreme circumstances should you get out of the car; for example, if someone throws a Molotov Cocktail or is about to do so, then yes, get out. Otherwise, when you are in the car, you have at least a moderate level of barrier and temporary protection by being in the car. So while you should be prepared to exfiltrate from your car (by not having your seat belt on), do not do so unless under an extreme situation. You cannot reason with a mob so do not try.

2. Make sure your doors are locked. The easiest points of entry are the doors. By denying the mob the easy point-of-access, they may move on to another unfortunate soul who does not have their car doors locked.

3. Roll down the windows a little. This is counter-intuitive but is true. Windows that are at their full extension are easier to break then windows that are slightly down. It’s simple physics.

4. Be prepared to use your firearm. Hopefully, you already know the virtue of living a self-defense lifestyle and have at least a firearm with you (not locked away somewhere inaccessible in the car). What would be better is to have a rifle with you like an AR15 or 300 Blackout or a SBS or SBR. Consider having another handgun with you in your car. What is better than one armed person with you? Two. Have another gun in your car to arm your passenger. Regardless of your preparation, make sure that you have plenty of ammunition. Know that once you start shooting, the mob will either disperse or much more likely collapse on you and try to kill you in their rage. Take your seat belt off as seat belts provide for a hindrance to your draw stroke. Keep your tactical advantage by keeping your firearm concealed unless you have to actually use it. That element of surprise to the enemy and the enemy unknowingly entering into a lopsided battle is crucial. If you announce that you have a gun, guess what? You may have just invited the gun toting evildoers in the mob to address you. I’d rather take advantage of unequal levels of force meaning that the mob brought fists to a gun fight than gun on gun. Know how your firearm works when it comes to shooting through vehicle glass and through the vehicle. Yes, Hollywood lied to you, your handgun will punch through the metal of a car (notable possible exceptions exist such as certain parts like the I-beams, and parts of the engine block). I was fortunate enough to take a class where I was able to shoot through all parts of a car using a handgun and a rifle. You’d be surprised, for example, what the slope of the front windshield will do with that first aimed shot as shown in this video:

And here is a video on the results and an explanation of why we see a difference:

[Prior to the video Jim Kauber (former Navy SEAL sniper and instructor) of The Site (former Blackwater North Training Site) explained this from a physics point-of-view. Here is Steve Stovall, instructor at The Site explaining it from a layman’s point-of-view]:

There are of course levels of force when it comes to people versus cars. The spectrum runs from the benign such as honking your horn or flashing your lights, to revving your engine, to moderate or insignificant use of force such as “bumping” (or pushing) people out of the way with your car, then perhaps to display of your firearm while “pushing,” and finally in the extreme running people over or shooting.

As a refresher, and as you wrote in that post,

The protections afforded by Pennsylvania’s Castle Doctrine through presumptions are set forth in PA ST 18 Pa.C.S. § 505(b)(2.1). As we wrote above, these protections are relatively extensive. As such, for the purposes of this statute, your “castle” includes your dwelling, your residence, or your car if you are in it.

When you are in these locations, and certain circumstances are present, there is a presumption that you have a reasonable belief that deadly force is necessary to protect yourself against death, serious bodily injury, kidnapping, or sexual intercourse by force. If you recall, that is the very definition of when deadly force is permitted. Therefore, under the following scenarios, the law will presume that use of deadly force was reasonable:

In scenarios one and two, somebody is breaking in, or has already broken into your dwelling, residence, or car (if you’re in the car). In scenario one, picture somebody breaking the door down, breaking windows to get in, or in the case of a car, forcing their way through the door or window. In scenario two, they’re already in. This is the late night intruder who you find downstairs after hearing some noise, the burglar you wake up to bedside, or the car-jacker who forced their way into the back seat when you stopped at a red light.

If you are attacked in a place where you would normally have a duty to retreat, provided certain criteria are met, you “[have] the right to stand [your] ground and use force, including deadly force.”

In order for this to apply, you:

Unless you are being attacked by someone who has what appears to be some kind of deadly weapon, Stand Your Ground will never come into play. Stand Your Ground protections are also not afforded to those engaged in criminal activity, those who are in illegal possession of a firearm, or when force is used against a known law enforcement officer.

It is best to think about these things and be ready for them both from the tactical, practical, and legal point-of-view beforehand. Hopefully this blog post helped. If it did, share it with your friends. It may help save their lives.