How Will BATFE and PSP Measure My Barrel?

How Will BATFE and PSP Measure My Barrel?

Whether or not a gun is subject to National Firearms Act (NFA) regulations has a tremendous impact on the procedures you must follow in order to legally possess the weapon. Firearms not subject to the NFA are governed federally by The Gun Control Act of 1968 (GCA or GCA68) and can be purchased by law abiding gun owners fairly easily in many states, including Pennsylvania. However, getting a weapon which is subject to the NFA is an entirely different animal. This involves a lengthy and somewhat burdensome process, and failure to follow this process properly can lead to stiff legal consequences including possible criminal prosecution. The criminal prosecution can be very serious. In federal court illegal possession of NFA controlled firearms carries a possible period of incarceration up to 10 years as well as the automatic forfeiture of a person’s rights to own, possess or transfer any form of firearms in the future forever. A lesser form of federal prosecution for illegal possession of NFA firearms is in the form of willfully attempting to evade or defeat the NFA tax. It is a felony punishable by up to five years in prison and a $100,000 fine ($500,000 in the case of a corporation or trust), under the general tax evasion statute. For an individual, the felony fine of $100,000 for tax evasion could be increased to $250,000 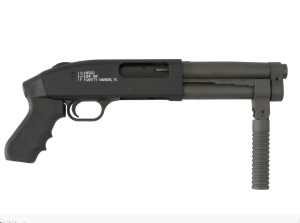 As discussed in our recent post SB 15: Stabilizing Brace or Illegal Short Barrel?, short-barreled rifles and short-barreled shotguns are subject to NFA regulations.

As being one-tenth of an inch shorter than the above will subject your weapon to NFA regulations and you to a possible criminal prosecution, it’s important to understand how barrel lengths are measured to comply with the law. 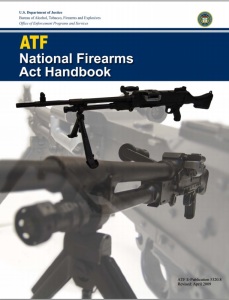 The following is a description of the measuring process directly from the NFA Handbook produced by the Bureau of Alcohol, Tobacco, Firearms and Explosives (BATFE). 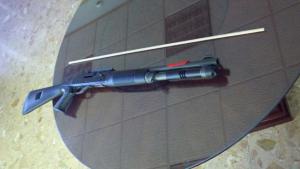 Many people simply use a tape measure and check the barrel length from the outside. We highly recommend that you refrain from doing so. This is not the method used by BATFE, and a conflicting measurement can cause you much more trouble than it’s worth. Take the extra time and measure your barrel properly.

Also, remember that BATFE takes its measurements with the bolt closed, so be sure to do the same. Always check your weapon to ensure that it is unloaded.

The bolt is closed, and we insert our dowel into the barrel until the rod stops against the bolt. 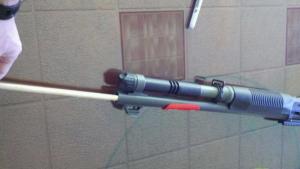 We mark the dowel as it lines up against the tip of the barrel. Because the barrel is unmodified, we do not have to determine which part is a “permanently attached muzzle device.” If you must make this determination, remember that only “full-fusion gas or electric steel-seam welding, high-temperature (1100°F) silver soldering, or blind pinning with the pin head welded over” are methods which qualify as permanent. Parts attached by other methods will not count towards length for the purpose of BATFE measurements. 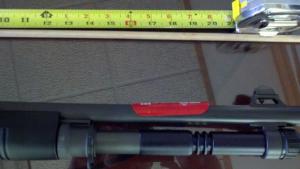 Now that the dowel is marked, we remove it and use a tape measure certified by the National Institute of Standards and Technology (NIST) to measure the dowel from its tip to the marking.

As we can see, the marking is exactly 18.5 inches from the tip. Therefore, by BATFE standards, this Benelli M4 is over 18 inches, and NOT subject to NFA regulations.

There you have it. It’s not tremendously complicated, but it can be tremendously important. Especially if your rifles or shotguns have been, or are soon to be modified, be absolutely certain that you measure properly. If you have firearms that are completely generic, practice on them. Get familiar with the procedure. Doing so will ensure that your mere possession of a firearm with a short barrel does not rob you of your status as a law abiding gun owner.

Some violations of the Pennsylvania Uniform Firearms Act of 1995 depend on the definitional component that is in 18 PS 6102. In it we find the following definition that depends on barrel length:

The Pennsylvania State Police (PSP) and local departments that prosecute possible violations that depend on this definition of “Firearm” yet the method of doing so is not as well defined as the BATFE method. The PSP follow the BATFE method.

However, there are important notes beyond the 6102 definition of “firearm” that come into play in Pennsylvania.

Barrel length is no longer element of the offense that certain persons could not possess, use, control, sell, transfer, or manufacture a firearm, and, thus, the statutory definition of “firearm” to include shotguns less than certain length did not apply. Commonwealth v. Gillespie, 821 A.2d 1221, 573 Pa. 100, Sup.2003, certiorari denied 124 S.Ct. 442, 540 U.S. 972, 157 L.Ed.2d 320. The statute prohibiting the conduct contained its own definition of “firearm” to include any weapon designed to expel any projectile by the action of an explosive. Id.